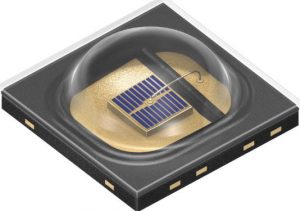 “Infrared light sources in a wavelength range <900nm are perceived by the human eye as a red glow. This red glow is largely suppressed at 940nm,” claimed the firm. “The leds are particularly bright, with an optical output of up to 2W in continuous operation. A high refractive index silicone is used for the lens, giving it a particularly low profile so that only very little light is lost from the sides.”