Home > News > Brushed motor driver handles up to 50V 9A

Brushed motor driver handles up to 50V 9A 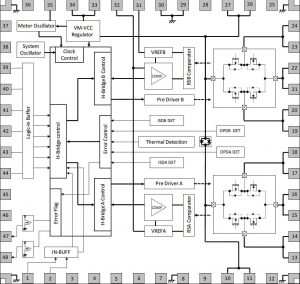 Called TB67H420FTG, it can separately control two 47V (10Vmin, 24Vnominal) motors running at up to 4.5A, or via a separate mode the bridges can be combined to power a single 47V 9A motor. The internal mosfets have 0.17Ω on-resistance in single bridge mode, and 0.33Ω in dual bridge mode.

It is based on Toshiba’s latest 130nm process technology. “Brushed motors are unique in that they require support for inrush current that has the potential to strain drivers,” said the firm. “Normally high-power drives are realised with mixed technology using an integrated driver and discrete switching mosfets. However, while this approach is valid, it increases the component count thereby increasing cost and size.”

In single motor mode, the bridges are not quite in parallel

Tt avoid the use of charge-pumps or bootstrapping, the bridge top mosfets are p-channel types.

The firm’s ‘Advanced Current Detection System’ monitors and controls current without sense resistors. Alongside current limiting are built-in error detectors for over-temperature and over-current. plus under-voltage lock-out. An detection output flags any errors to the system.

This all comes in a 7 x 7mm QFN48 surface-mount package.